At the State Museum of the State cultural centre of Turkmenistan is organized an exhibition named «Akhalteke horse – the pearl of beauty». 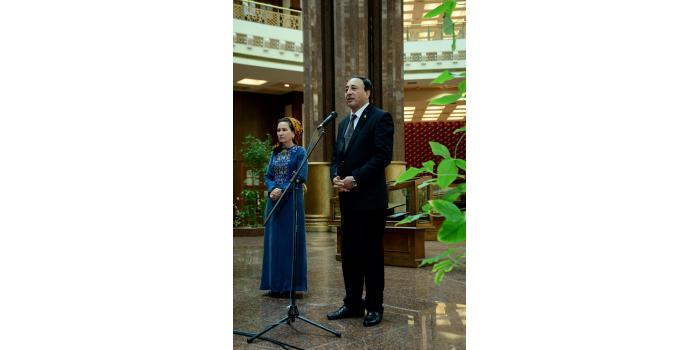 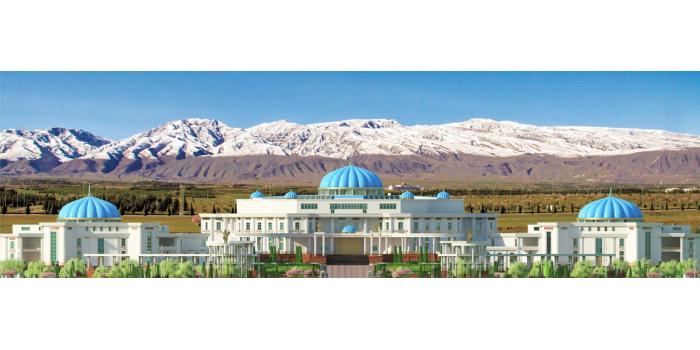 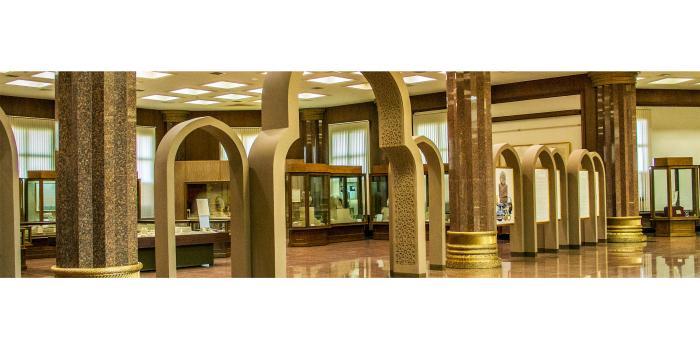 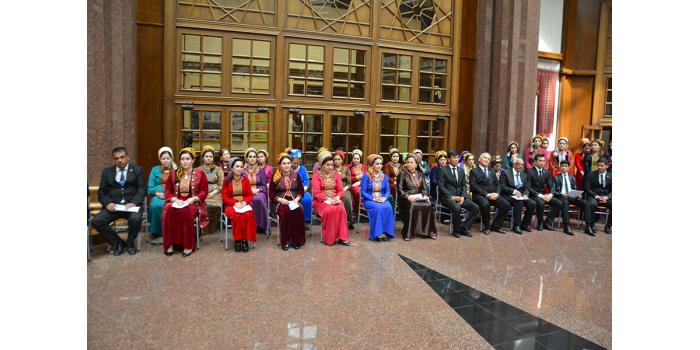 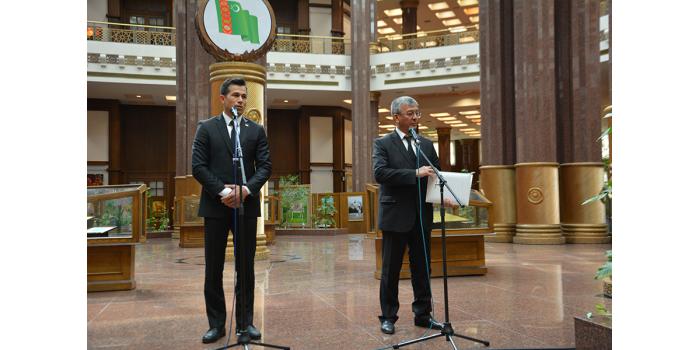 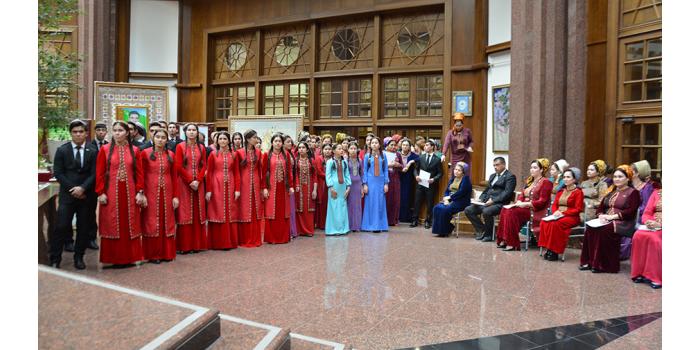 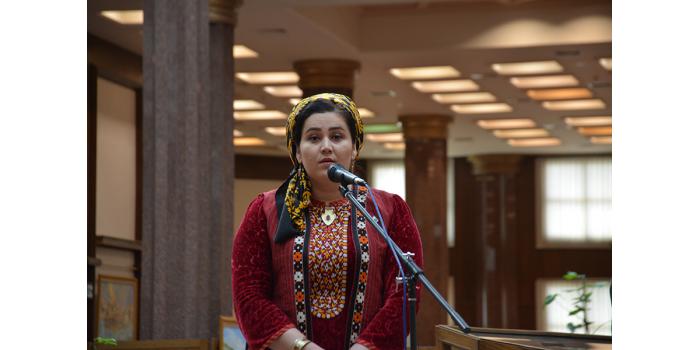 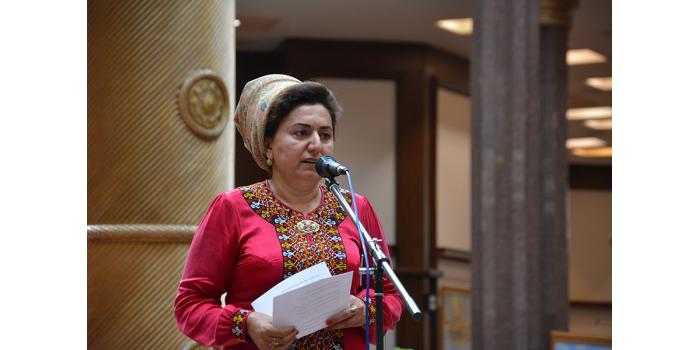 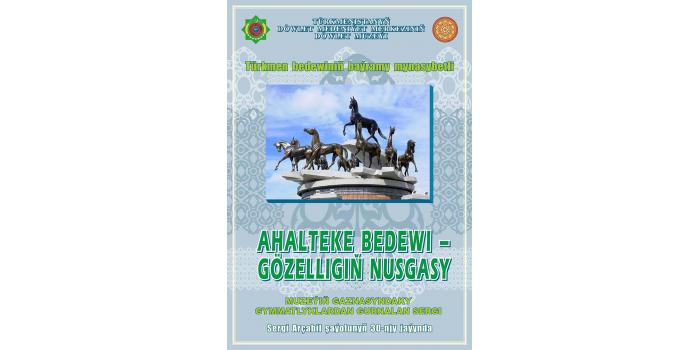 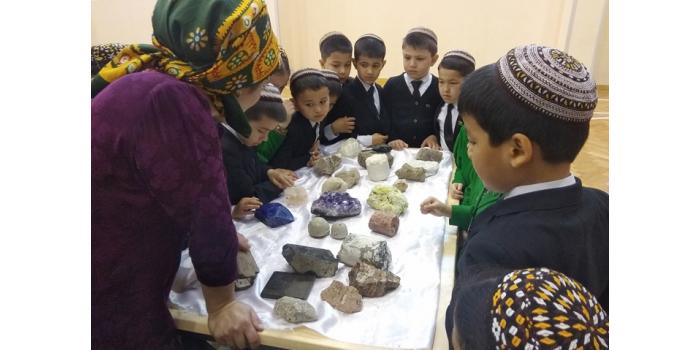 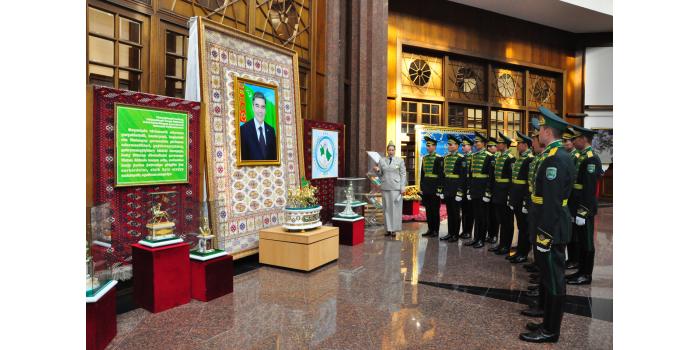 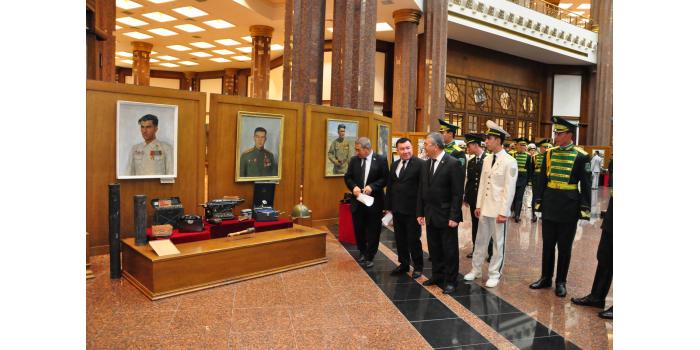 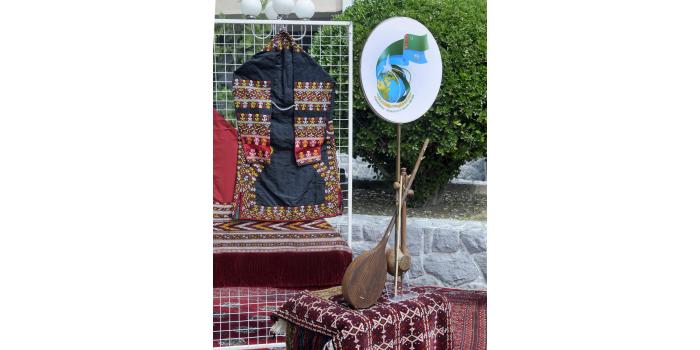 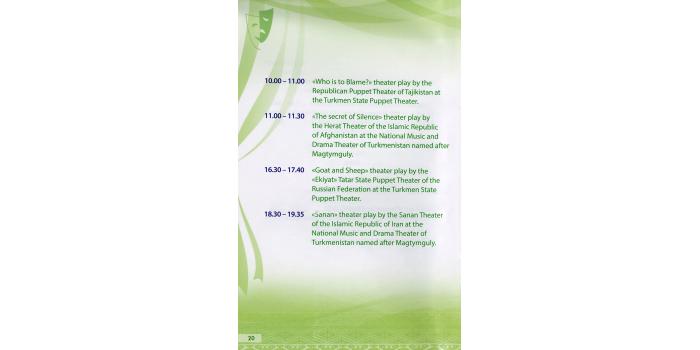 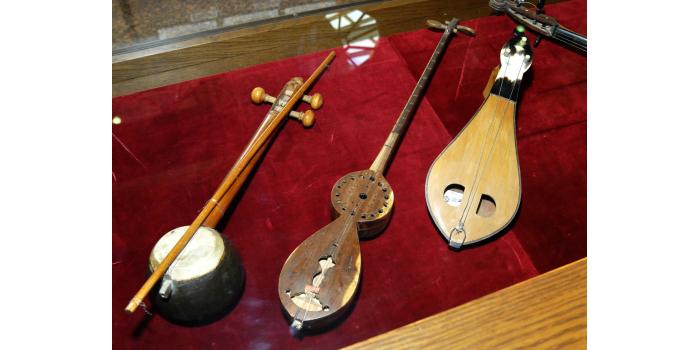 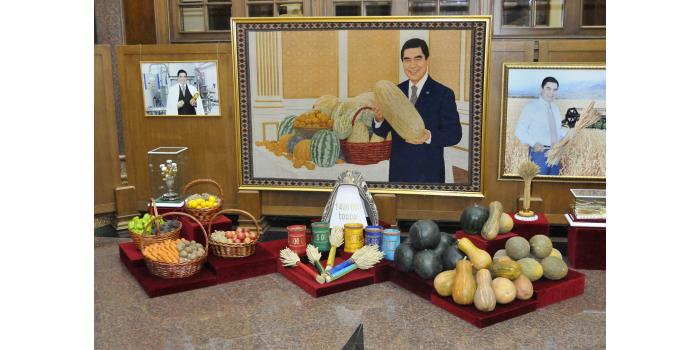 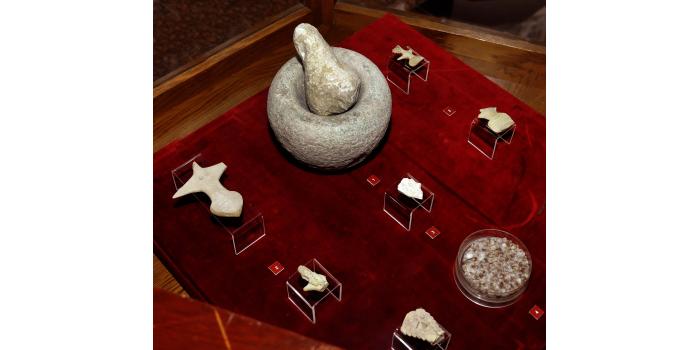 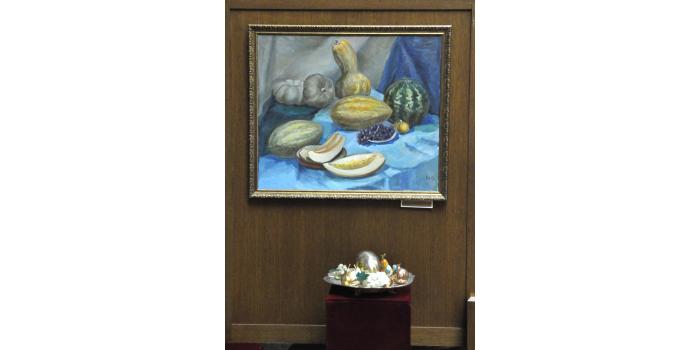 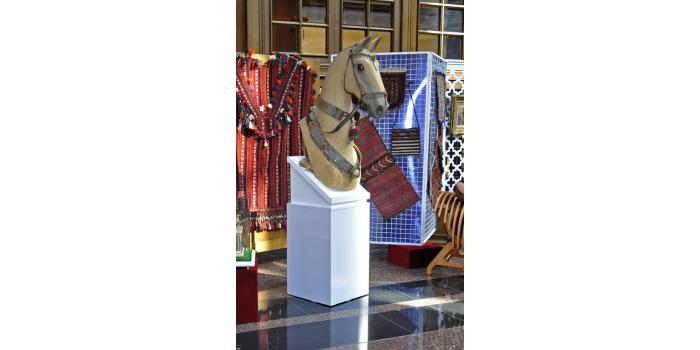 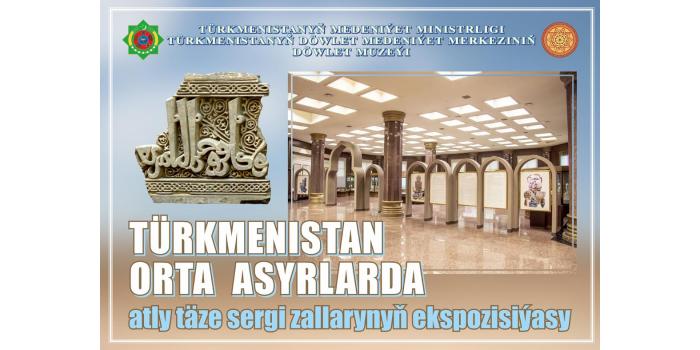 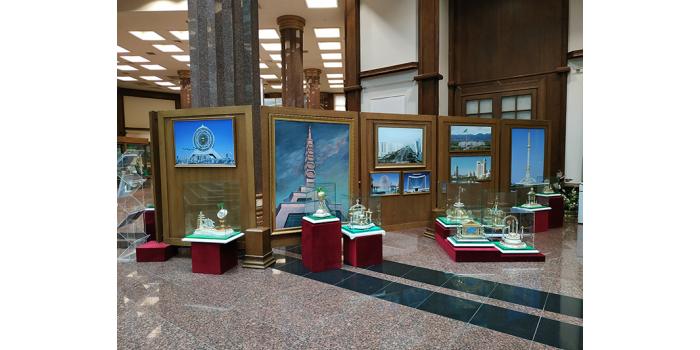 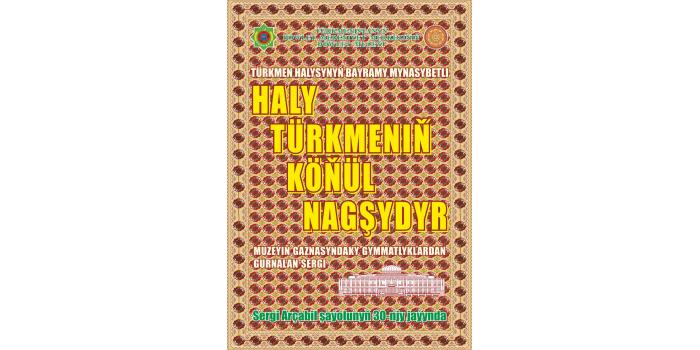 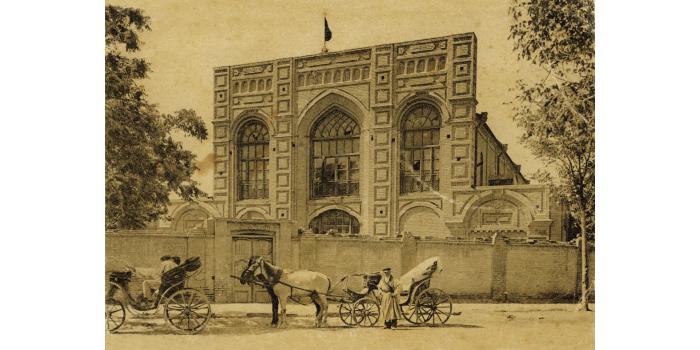 On the 24-th of April 2019, the year declared «Turkmenistan – Motherland of prosperity», at 15:00 at the State Museum of the State cultural centre of Turkmenistan took place inauguration of the exhibition named «Akhalteke horse – the pearl of beauty» devoted to the National holiday of Turkmen horse.

Horses of paradise take a special place among national values. National holiday of Turkmen horse, which is celebrated in our country each year on the last Sunday of April popularizes playfulness, beauty and glory of Akhalteke horses all over the world. The birth of a foal of elite Akhalteke breed in the first days of 2019 passing under the motto «Turkmenistan – Motherland of prosperity» became glad event for Turkmen horse breeders. It is one more favourable sign that large-scale and significant affairs will have luck. Hereupon, the honourable President named the foal Rovach, that means success.

The exhibition begins with the wise words of the honourable President Gurbanguly Berdymukhamedov about a Turkmen horse, his books, аnd photos as well, where the hero Arkadag on horseback of elite Akhalteke horse Akhan. In the middle of the exhibition is shown a history of the beginning of the ХХ century. Here you can see horse cloth made of carpet and felt mat. They are adorned by the horse adornments made of silver with gilding. These adornments skilfully made by jewellers show the attention paid to the horse. The exhibition has a special effect with the saddle, stirrups, whip and other museum values, image of Turkmen warrior. In the part of the exhibition concerning history are exposed more valuable exhibits, documentary photography from the store-house of written sources with the image of thoroughbred Akhalteke horses.

A special place is given yo the works of well-known artists, who has painted Turkmen horse. Among them may be pointed the picture of I.Ishangulyyev «Gayduvsyz», «Turkmen horse», «Toychy», O.Mammetnurov «Yanardag», P.Gapanchayev «Akhan», «Berkarar». Besides it, here are demonstrated jewellery compositions with various images of Akhalteke horses.

The exhibition was opened with the words of greeting by the manager of the State Museum of the State cultural centre of Turkmenistan, candidate of historical science Ovezmukhammet Mammetnurov. Then the flour was given to the head of division of the State Museum, deputy of Мajlis of Turkmenistan, candidate of historical science Suleyman Suleymanov, participant of the National «Galkynyş» equestrian sport group Aman Byashimov, deputy editor-in-chief of «Adalat» newspaper Gurbanjemal Annakova, subeditor of «Ahal durmuşy» newspaper Durnabat Ashyrova, the worker of the Akhalteke equestrian complex of the President of Turkmenistan Gadam Orazmammedov, deputy editor-in-chief of «Bereketli toprak» newspaper Aynabat Atayeva, subeditor of «Türkmenistan» newspaper Ismayyl Tagan, the deputy editor-in-chief of «Watan» newspaper Chemen Annaberdiyeva, poet, translator Annaberdy Gochamanov, main specialist of Central Election Commission Guljemal Nuryyeva, second-year student of Turkmen National institute for sport and tourasm, jockey of the Akhalteke equestrian sport complex of the Peasident of Turkmenistan Baba Babayev, jockey Khezret Ashyrov.

Very interesting reports made a good impression on those present.Then the guests get acquainted with the exhibition «Akhalteke horse – the pearl of beauty» and listened to the speeches of museum staff.